What is Shio Koji (塩こうじ/塩麹/塩糀)?

Shio Koji (塩こうじ/塩麹/塩糀) is a Japanese fermented ingredient. It’s made of salt, water and Rice Koji (米こうじ/米糀/米麹). We can use it to marinate or tenderize. In Japan, we have lots of fermented food such as Soy sauce or Soybean paste and Shio Koji is one of the most popular seasonings nowadays.

People in Japan recently re-discovered the benefit of Shio Koji, but it is one of the traditional foods described in the Edo period (1603-1868). It is suggested that it has been used mainly in the Tohoku (North East) region for a long time.

It is called a “magical seasoning” useful for any purpose. It is not limited to foods such as meat, fish and vegetables, and cooking methods such as Japanese and Western. Shio Koji can enhance umami in foods. It’s an active food including lots of enzymes which helps digestion. It’s also described as “miso without soybeans”.

It looks like Amazake (Japanese cloudy rice wine which is sweet and low-alcoholic), but Shio Koji is much saltier. It also has a mixture of the pungent taste of salt and saccharified sweetness of rice starch which sometimes smells like a banana when it’s well-fermented.

Shio Koji can break down the starch and protein contained in the ingredients to bring out the umami and sweetness to make the food delicious. The meat becomes soft after it is marinated with it. It can help to add beautiful baked colour on the food when you use it for baking or frying to boost up your appetite.

What is Rice Koji (米こうじ/米糀/米麹)?

Rice Koji (米こうじ/米糀/米麹) is steamed rice that has been treated with Koji mould. Koji is an important part of Japan’s food that has been cultured over the centuries.

What is the difference between mould and yeat?

Both molds and yeast belong to the kingdom of Fungus, and are Eukaryotes.

Molds are microorganisms which have a tendency to grow with help of multiple celled filaments called as hyphae, whereas yeast is a microscopic form of fungi having just a one cell.

How to make Shio Koji 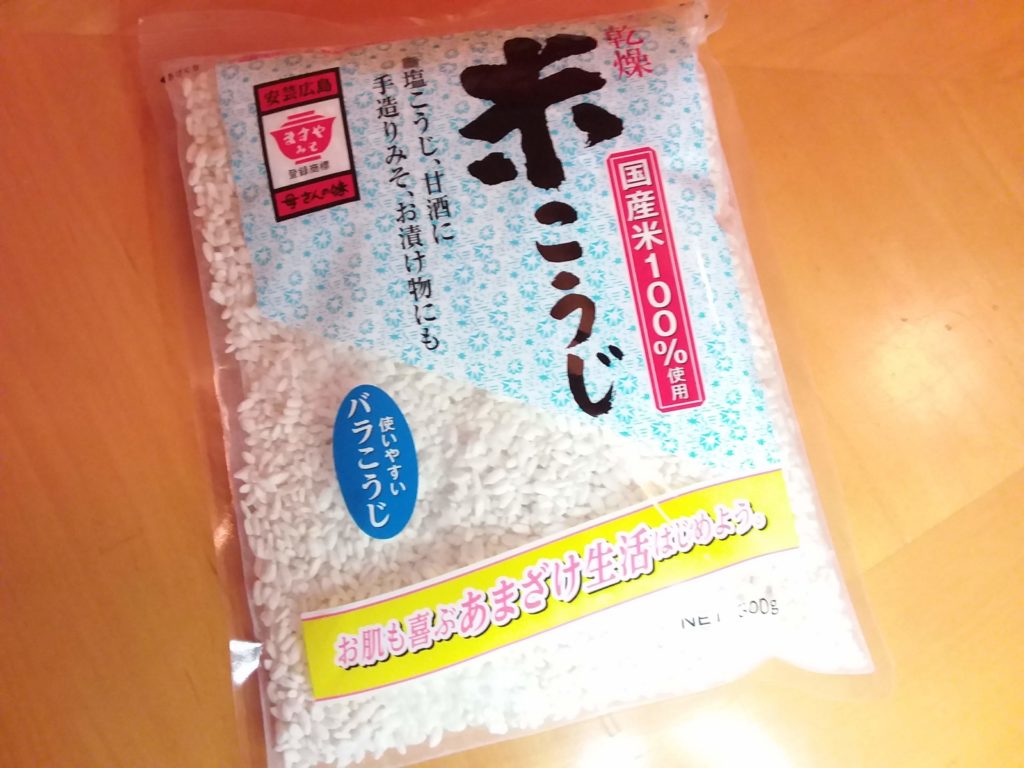 Dried Rice Koji is easy to handle. There are two types: block and broken down in pieces. Rice Koji is also used for making bean paste, Amazake, and so on.

Salt must be a quarter to one-third of the weight of Rice Koji.

How to make Shio Koji 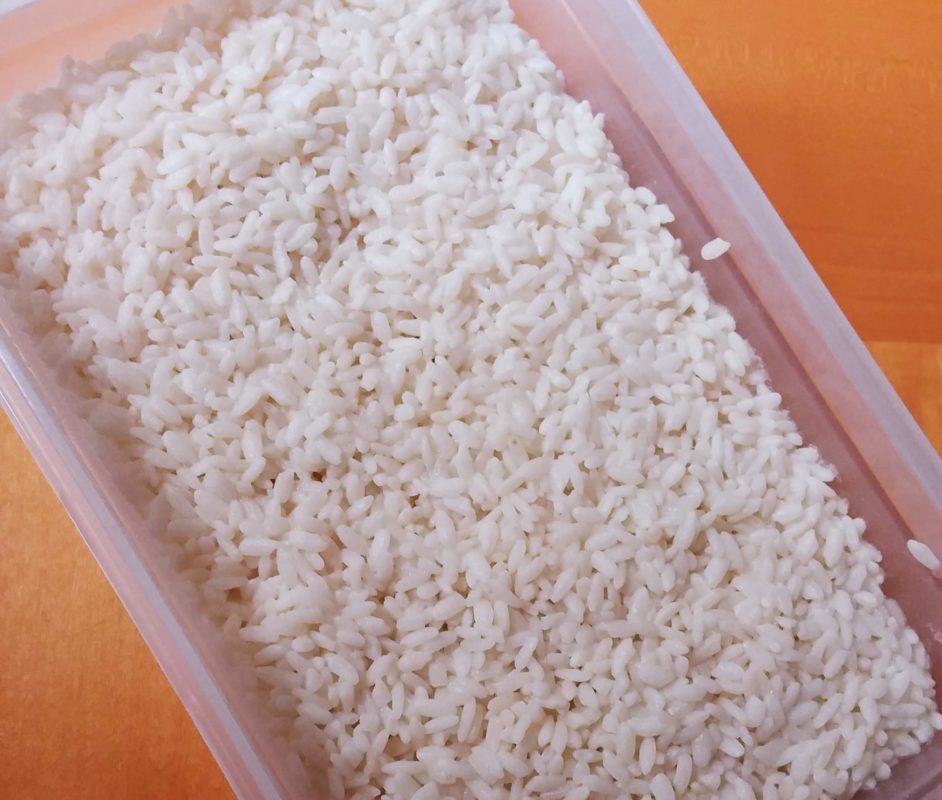 Making Shio Koji is very easy. After salt and water have been added to koji, it must be fermented at room temperature for 7-14 days. The fermentation period depends on the temperature and your flavour. It gets salty at the first stage and it becomes sour, as the days go by. When you think it’s fermented enough, you can put it in the fridge to slow down the fermentation. 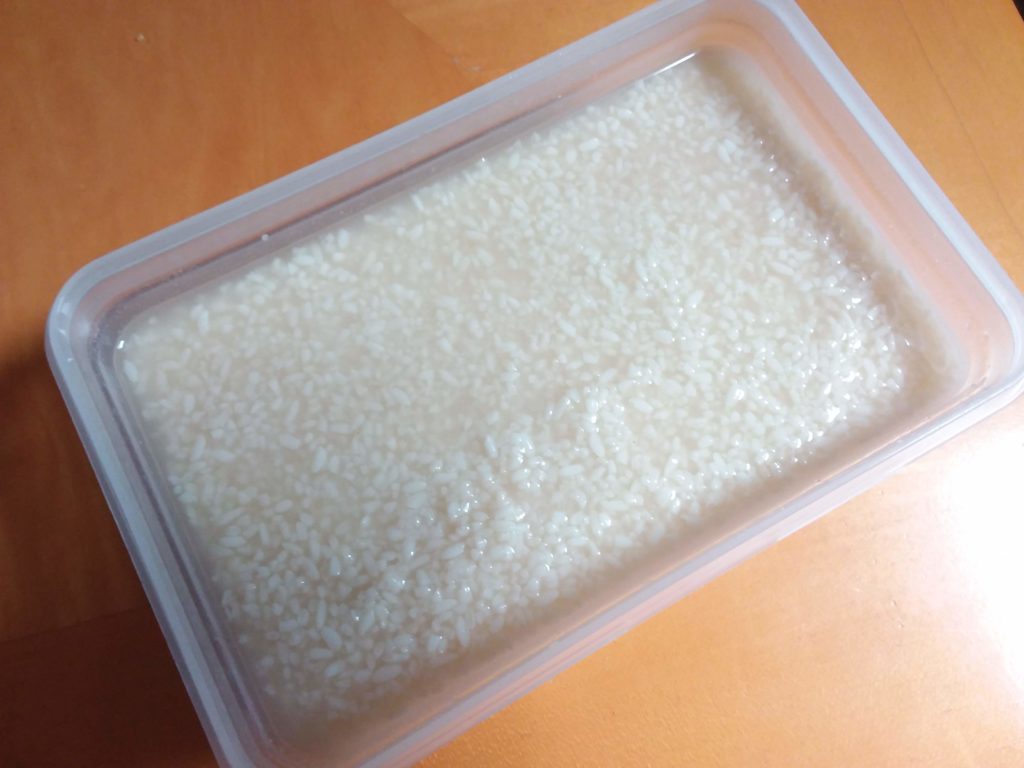 As the fermentation proceeds, the colour becomes caramelised, it gets a scent of fruits and a divine flavour. 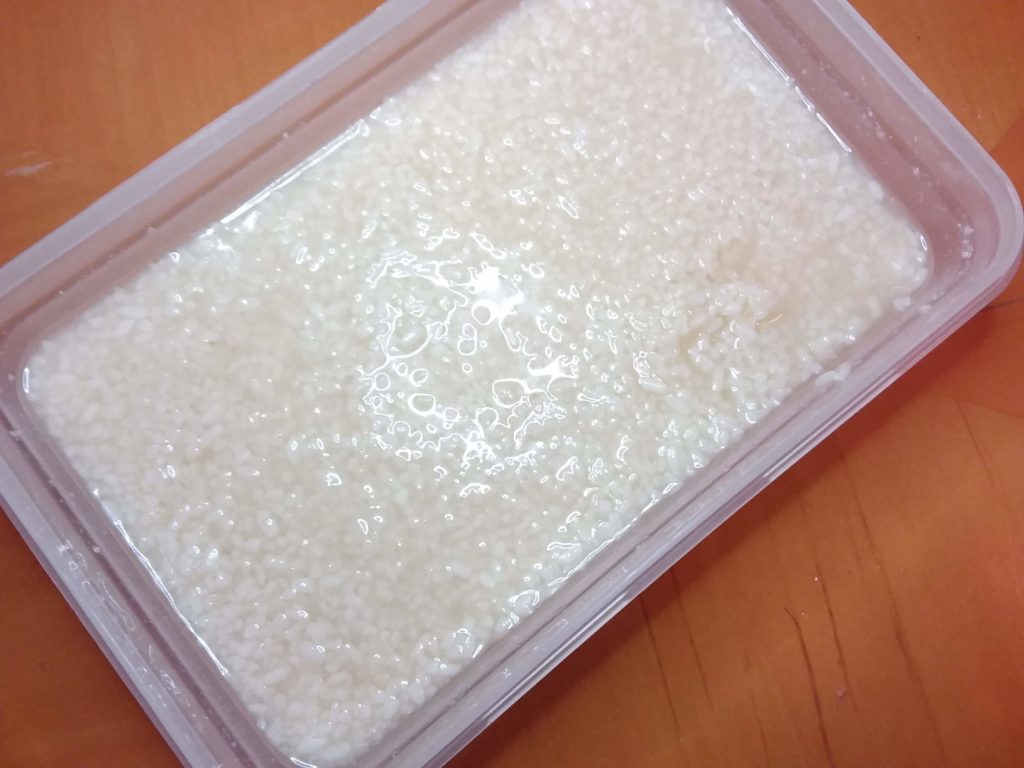 After the fermentation, you can keep it in the fridge for six months. Same as miso (bean paste), it can be stored for a long time when it contains appropriate salt. If the salt is not enough, it’s more difficult to store but it can be too salty if you put too much salt.

The process of fermentation depends on the temperature. It ferments slowly at a low temperature and it’s accelerated with a warmer temperature. Please note that the enzyme included in Koji stops working at 60℃. Therefore when you use it for cooking, it is better to cook after marinating to enjoy the taste of Shio Koji.

It also depends on the quality of Rice Koji 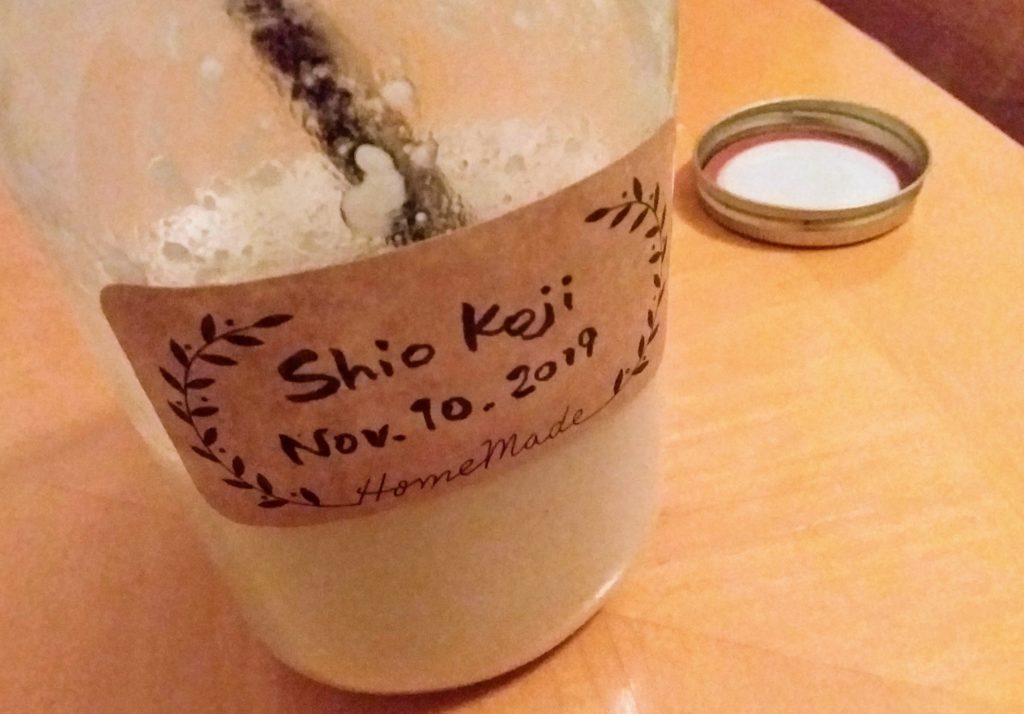 This is my second time for making Shio Koji and I used Rice Koji form a different brand. I think the Rice Koji which I used this time was a little newer than the one last time. I realised that the fermentation proceeds faster than the previous time. It was very lively when I put them together in a jar on the first day generating bubbles. 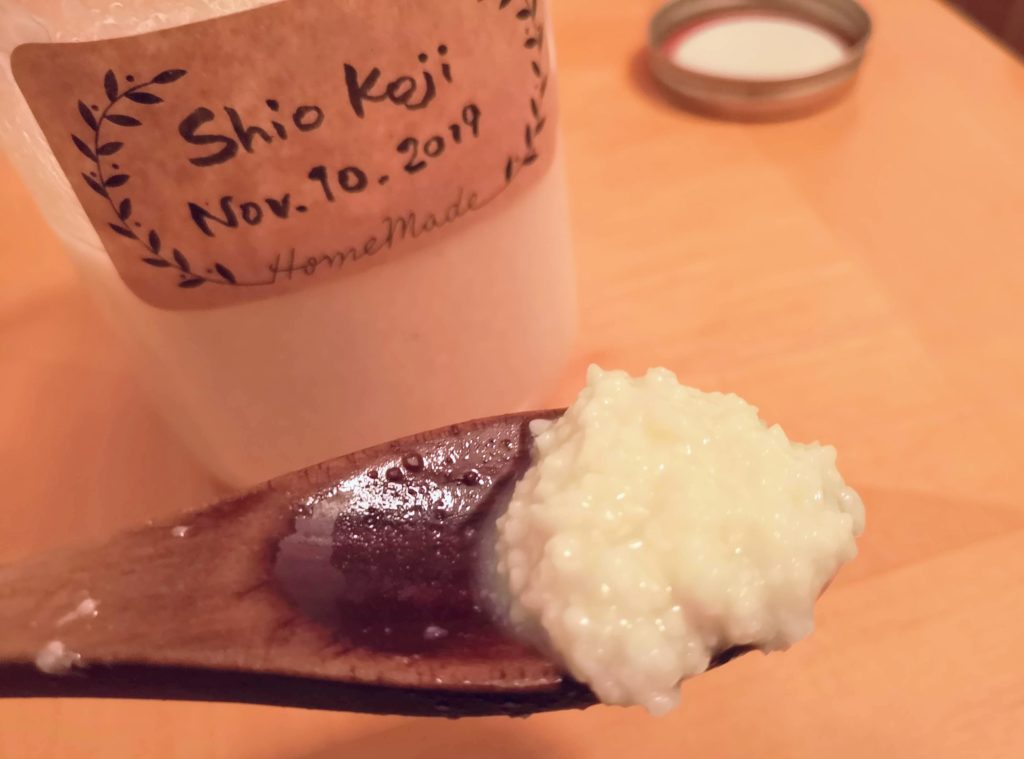 This is day 5, and it looks fermented enough already. The rice is more broken than the previous. I think it is because I stirred too much.

Moreover, the room temperature is quite high in our apartment with the central heating system, luckily, even though the winter in Quebec is cold and long.

How to use Shio Koji

We can use Shio Koji to marinate meat, fish, to make pickled vegetables and dressing. It can be used just as a salt substitute. It is recommended to use twice as much as using salt alone. For pickling, about 10% of the weight of the pickled ingredients is appropriate.

Apply Shio Koji to cut vegetables such as cucumber, Daikon radish, eggplants or cabbage, and rub them. Leave it in a cool place for hours and serve it.

After pickling vegetables, the leftover juice can be used for making salad dressing or seasoning sauce.

The longer the marinating time is, the saltier the food becomes. Food with Shio Koji is very easy to get burnt. I recommend you stay with the food while cooking.

When you use a frying pan, you may have too much moisture coming from the meat. It is better to remove the moisture from the meat just before you cook it. I also recommend using aluminium foil or oven paper to easily clean the frying pan after cooking.

Food with Shio Koji is very easy to get burnt. I recommend you stay with the food while cooking.

Enzymes in Koji can break down starch and proteins into sugars and amino acids to enhance sweetness and umami. Also because of the effects of lactic acid bacteria and yeast, the ultimate food will have a lot of taste elements, so that you can enjoy the complex tastes more than when you eat ingredients alone.

Since the enzyme can break down starch and proteins, it can soften the meat when you marinate.

Shio Koji contains more nutrients than salt such as vitamins (B1, B2, B6, pantothenic acid, biotin (vitamin H)), etc, because of the action of enzyme and microorganisms such as lactic acid bacteria and yeast.

The lactic acid bacteria are known for their “intestinal action”, which regulates the intestinal environment. It is said that there is a good effect for improving the constitution or skin condition. You may notice that the skin of your hand and fingers become smoother after you treat the food with Shio Koji.

This is an easy and quick recipe for coleslaw salad with Shio Koji. It's handy when you want to add one more side dish o...
2021.03.11

Teriyaki Chicken is one of the favourite foods for everyone including Japanese, non-Japanese and children. You can bu...
2021.03.11