You cannot miss Miso for your authentic Japanese cooking. Miso is one of the most frequently used ingredients for Japanese food.

In the past, most Japanese people used to make homemade miso in their homes and were proud of their miso as an achievement of their effort and time. Disappointingly, homemade miso is becoming less common nowadays and most people buy Miso at supermarkets.

I was not a big fan of Miso, to be honest with you. However, since I moved to Canada where it is not easy to find a decent Miso at the supermarket I have started making Miso at home.

Making Miso is not very complicated. I have already tried a few times and I love making Miso now. It is good that I no longer have to go to the shops to find my favourite Miso and end up being frustrated when it’s not available. Homemade Miso is also free from food additives.

I am going to share my recipe of homemade Miso. I hope that it’s helpful to enrich your food life.

The secret of Miso taste 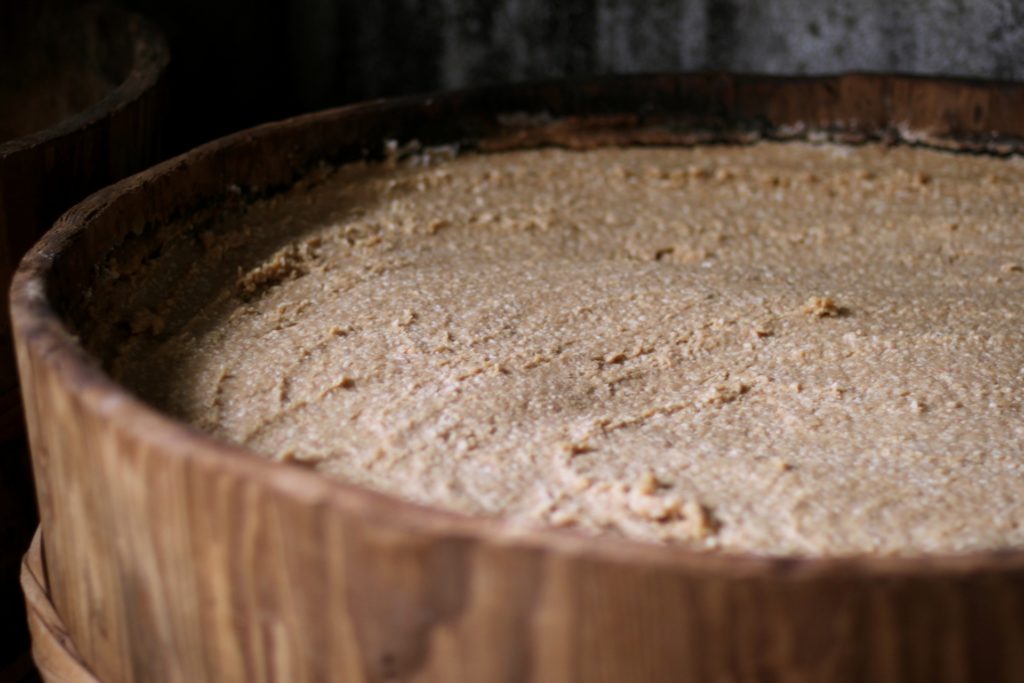 Miso stored in a wooden bucket

The ingredients of miso are very simple: soybeans, Koji and salt. Is it amazing that such a simple raw material can create such a deep and signature flavour?

The secret of its taste is the Koji.

Koji fungi provides enzymes such as “amylase” which break down starch or “protease” which digests protein. They change the starch of soybeans into sugar which lactic acid bacteria and yeast love, while they also turn protein into amino acids and peptides which bring umami and the rich flavour.

Unlike other types of yeast, the lactic acid bacteria and yeast born in this process uniquely have “salt tolerance” that allows them to grow even in concentrated salt.

The various substances produced by yeast and lactic acid bacteria culture the rich and complex taste of Miso as a result.

Type of Miso and Koji 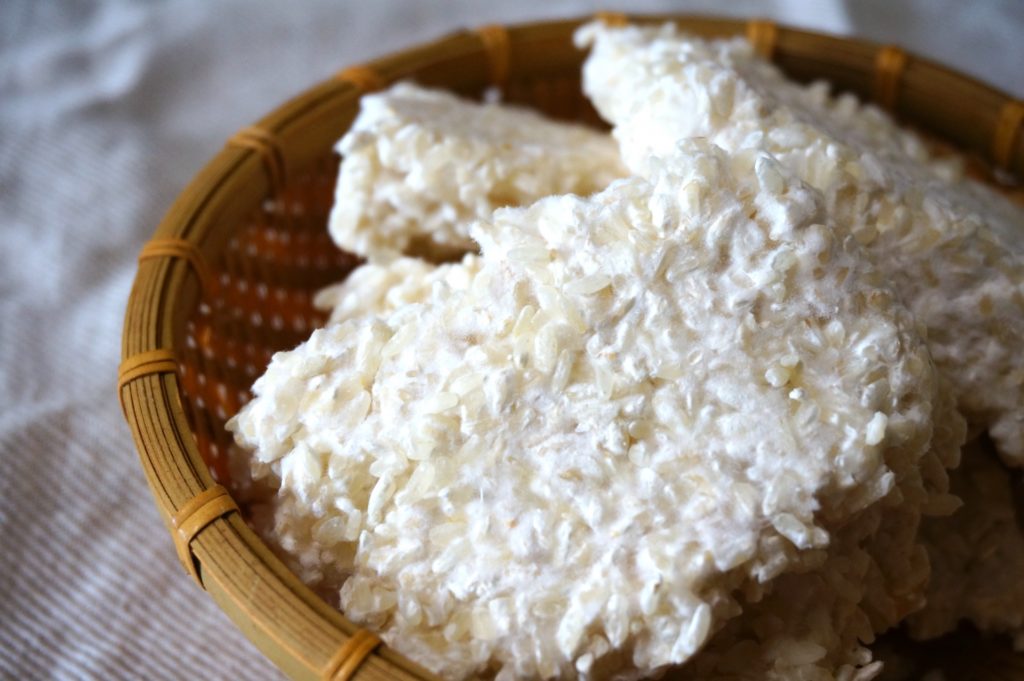 Koji is a type of mould or fungi, and it plays an important role in making sake, soy sauce, miso (soybean paste), mirin, rice vinegar, and Shio Koji.

Miso is made of soybeans and there are three types of Miso depending on which Koji is used.

“Kome miso (rice miso)” or “Koji Miso” is made with rice Koji. This is the most popular and widely used. It has a good aroma and sweeter taste compared with other types of Miso.

“Mugi miso” is normally made with barley Koji although there is also “Mugi miso” made of wheat Koji. It has a whitish colour, unique sweetness and a deep taste. It’s suitable for dishes that you eat miso as it is. More popular in Kyushu, Chugoku and Shikoku regions rather than other parts of Japan.

“Mame miso” which is made with soybean Koji is mainly produced in Nagoya city and around. The ageing period of “Mame miso” is longer than other types of Miso and it has a dark reddish-brown colour, less sweetness and strong umami taste.

How to make Miso (Bean Paste)

There are various types of miso, but here I introduce the basic “Kome miso” with rice Koji.

You may think it’s difficult to make homemade miso, but the ingredients are simple. It’s also a nice feeling to be sure your Miso doesn’t contain any food additives. So why don’t you try?

You can make homemade Miso at any time of the year, but if you are making it for the first time, it is recommended making it in winter when there is less risk of propagation of germs.

Ingredients for 5kg of Miso

Note: If you like sweeter, please use a larger amount of Rice Koji, and if you like saltier, use less of it.

2: Place the washed soybeans in a large pan and with 3-4 times their quantity in water.   Soak the soybeans overnight (12-18 hours), until the soybeans double in size.

3: Put the soybeans and enough water to cover the beans into a large pan and boil on a high heat until they are boiled. Scoop off the scum from the water surface while it boils. Simmer them on a low heat for about 3 to 6 hours until they soften. The soybeans must be soft enough to be easily crushed between your thumb and little finger. 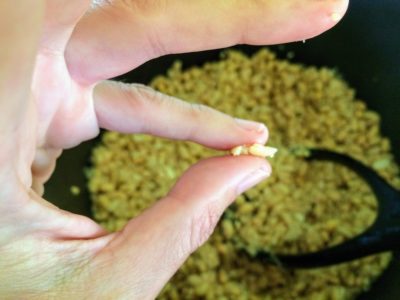 4: After the soybeans have simmered, drain the soybeans with a colander, but keep the broth for use afterwards.

6: Leave it until cool down.

Take about 50g of salt and put to one side because you will need to use it later. Place the rest of salt (if for example you want to use 500g of salt in total you would now take 450g) and the Rice Koji in a bowl, mix well until the Koji and salt are evenly distributed. (It’s called “Shio-kiri Koji”)

1: After the soybeans have cooled down to about room temperature, add Koji (which has already been salted – see Section 2) and mix well. Add the bean broth to adjust the hardness, it should be as soft as your earlobe:) 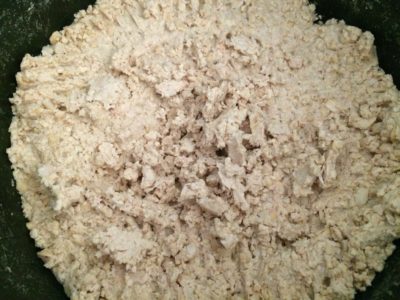 Mix the soybeans and Rice Koji attached with salt

2: When it gets to the appropriate hardness, roll it up into balls to make sure there is no air inside. 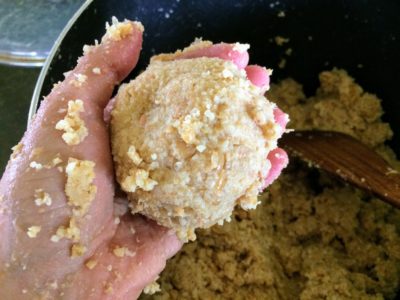 Roll it up into balls

3: Place the Miso balls in a container for fermentation while pushing them one by one, in order to leave as little air possible. After placing all of them, flatten the surface and sprinkle the remaining salt on the edge of the container. 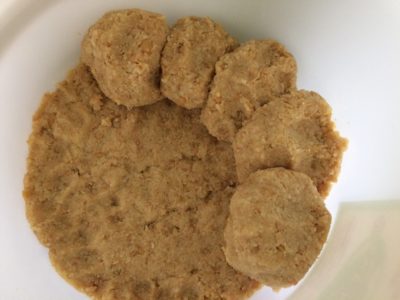 Place the Miso balls in a container without the gap

4: Cover the surface of the miso with a plastic wrap, place the inner lid (pushing lid) and put a 1-2kg weight on it, and then cover it with a lid or newspaper so that nothing enters the container. 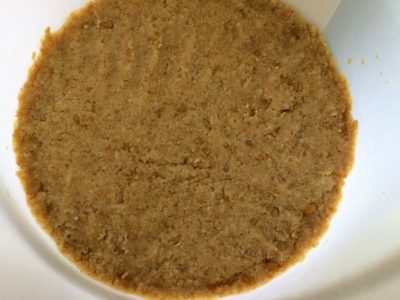 Flatten the surface with fingers to squeeze the air out

5: The preparation is now complete. You can eat as early as half a year to a year. (A place with about 27 ℃ is ideal for fermentation and ageing) 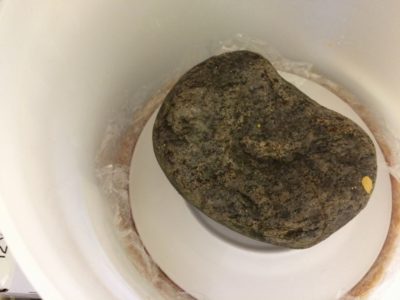 Put a stone to press the bean paste

6: Turn it over with a spatula once every 3-4 months. This is called “Kirikaeshi” in order for the  fermentation to proceed smoothly and evenly. Remove mould if there is any at the same time. Put a new plastic wrap to cover again and you can add a slightly lighter weight. 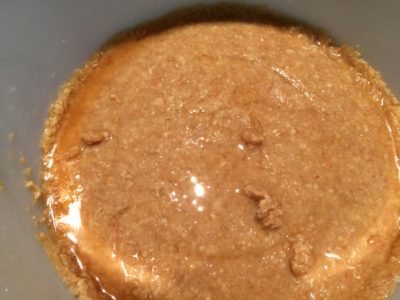 After 3 months of fermentation

7: After six months, taste test the miso until it’s fermented to the stage that you like.

8: When it’s fermented enough, divide it into small portions and store it in the refrigerator. 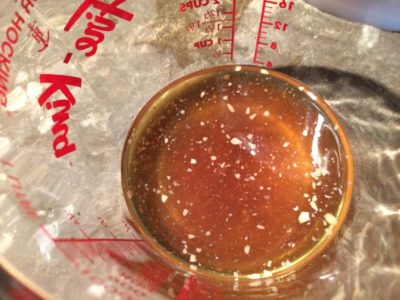 The supernatant that accumulates during the fermentation process is the primitive soy sauce.

The supernatant liquid which comes up from the bean paste during the fermentation process is the primitive soy sauce. You can use it for cooking as a substitute for soy sauce, or leave it as it is on the surface so that you can avoid getting it mouldy. 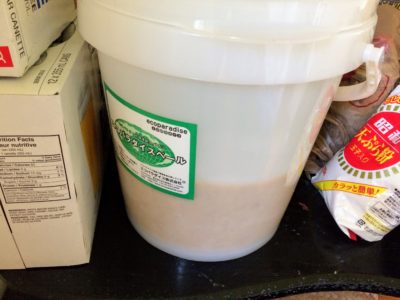 I store it in a plastic bucket

It takes a little time to prepare, but once you’ve prepared it, just wait for the fermentation.

The world of miso seems to be profound even though it is a simple material. The taste and flavour of homemade Miso changes depending not only on the ingredients and conditions but also on the amount of koji and the ageing period because it is simple food.

I love making Miso and my homemade Miso has a slightly different taste every time I make it.

In Japanese, the term of “Temae-Miso (homemade Miso)” is a classic metaphor of “being proud” or “self-praise”. It’s often used when someone praises themselves or their family. It’s because making homemade Miso used to be a part of their lives and each home had a signature flavour of Miso.

Miso is one of the most important parts of Japanese food culture, and you can also culture homemade bean paste with your flavour!

Miso (Soybean Paste) Making: Ratio of ingredients affects the Taste! Mathematics of Homemade Miso
I am planning to make Miso (soybean paste) at home this weekend. Miso making takes more than two days, so it is better t...

"Niku-miso" is stir-fried minced pork with Miso along with your favourite seasonings. You can put it on plain steamed ri...
2021.03.11

I made a homemade fermented drink with vegetables that we grew in our garden last year and have been using for gardening...
2021.05.27

Shio Koji is a great seasoning which can tenderise meat. When you cook the chicken in the oven, you can just use Shio Ko...
2021.03.11

Sushi is one of the most famous Japanese foods. There are a few different types of Sushi: Maki-zushi (Sushi rolls), Chir...
2021.03.11